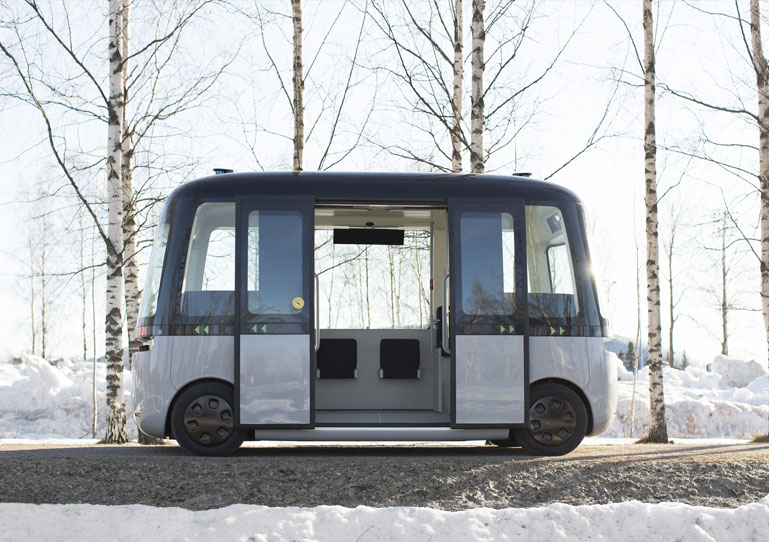 Finnish self-driving tech company Sensible 4 — known for its award-winning software that enables autonomous driving in any weather conditions — predicts that smart cities will have a significant impact on the speed of autonomous vehicles. Sensible 4 software doesn’t need purpose-built infrastructure to drive autonomously, but at a later stage, relevant real-time data could improve the driving to higher standards.

Autonomous vehicles are known for their slow speed. Most of the vehicles drive with a speed of 20 km/h and even Sensible 4’s faster autonomous vehicles driving 30-40 km/h can be considered to be slow – if compared to highway speeds that are 3-4 times higher.
“For public transportation in urban areas, our speed is enough and the speed is actually higher than other similar vehicles can reach currently”, Harri Santamala, CEO of Sensible 4, points out.
Autonomous vehicles anticipate traffic for two or three seconds into the future. In urban areas, where the speed limit is for example 30 or 40 km/h, the braking time and distance are short so stopping the vehicle can be executed safely and smoothly.

“Higher speeds require longer braking distance and time. This extends the requirements for predicting the traffic, which is impossible at highway speeds. To reach safe driving at higher speeds the autonomous vehicle would have to be sure there are no traffic disturbances ahead, far beyond the measuring distance of on-board sensors. For this we need smart infrastructure”, Santamala explains.

Countries and cities that want to be in the frontline on the new era of driving should start looking into options to support self-driving. Relevant real-time infrastructure data helps with predicting, avoiding incidents, and it can make driving more smooth and safe even at higher speeds. This data could be for instance about the weather, traffic, and road condition – something that can make the vehicle perform even better. Smart cities can include information relayed to autonomous vehicles via high-speed 5G networks and fixed sensors for example in intersections.

“We believe that autonomous vehicles are on urban roads shortly, within a few years. Building smart cities require cooperation and time, so cities should start planning how their infrastructure supports these vehicles. Also, on the governmental level, the legislation should be prepared for the change”, Santamala states.

Sensible 4 Oy is a Finnish tech company developing autonomous vehicles. The unique technology developed by Sensible 4 combines software and information from several different sensors, enabling vehicles to operate in all weather conditions, including snowfall and fog. At the end of February 2020, Sensible 4 secured 7 million dollars in series A funding round from Japanese investors.

The Sensible 4 technology has won multiple awards, including 1st place in the Dubai World Challenge for Self-Driving Transport 2019 competition. The Sensible 4 expertise and technology is based on research conducted by the Aalto University mobile robot research team, a pioneering endeavor in the field. The Sensible 4 team has experience in self-driving vehicles spanning 30 years.